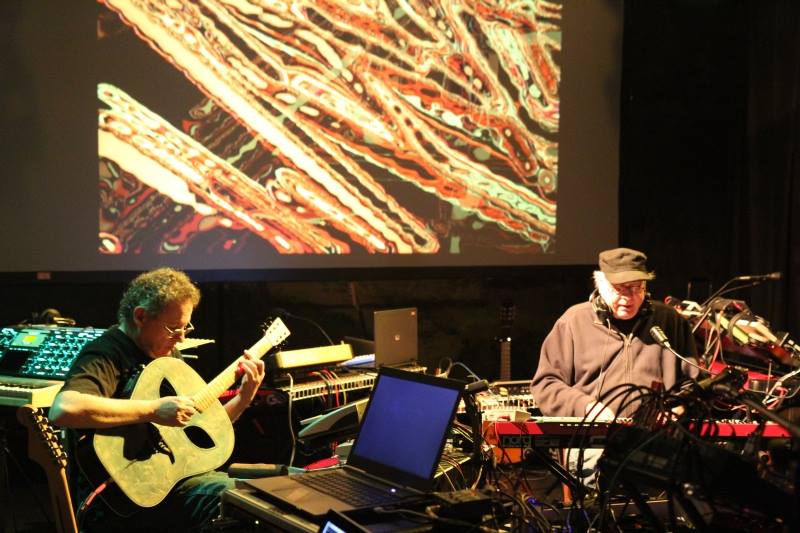 Twyndyllyngs are an electronic music chamber ensemble playing spacemusic that is suitable for everything from planetarium presentations to deep inner thought explorations. This duo consists of Howard Moscovitz (right) and Bill Fox (left).

Twyndyllyngs have been performing improvised electronic chamber music since 2003. They have performed at electronic music festivals in Europe and North America. They perform weekly on the internet radio station electro-music.com on most Saturday evenings at 6 PM Eastern USA time. Twyndyllyngs' experimental work is in many diverse styles ranging from neoclassical to experimental.

Bill Fox studied electrical engineering and electronic music at The Ohio State University. He is proficient on electric bass and guitar, saxophone, and various synthesizers. He formerly worked at AT&T - Microelectronics/Lucent Technologies in Allentown, Pennsylvania where he first met Howard Moscovitz in 1992 after having known each other only through email since the 1980s. Bill performs in several bands besides Twyndyllyngs including Prog Rock, symphonic band, and orchestra. He has also performed in folk, Celtic, and Rock ensembles plus pit orchestras for musicals. He produces two radio programs which have a worldwide internet audience as well as an associated concert series.

Howard Moscovitz has graduate degrees in both music composition and electrical engineering. He began working on electronic music in 1967 with William Hoskins at Jacksonville University. He received an MFA in electronic music from Mills College where he studied with Robert Asheley, Stanley Lunetta, Darius Milhaud and John Cage. While working as a free lance composer, Howard earned a Masters in Electrical Engineering from the University of California at Berkeley in 1981. He then moved to Pennsylvania to work as a designer of the first DSP micro-circuit at Bell Labs where he met Bill. Howard started electro-muisc.com in 2002. The community has produced dozens of festivals in the USA and Europe.